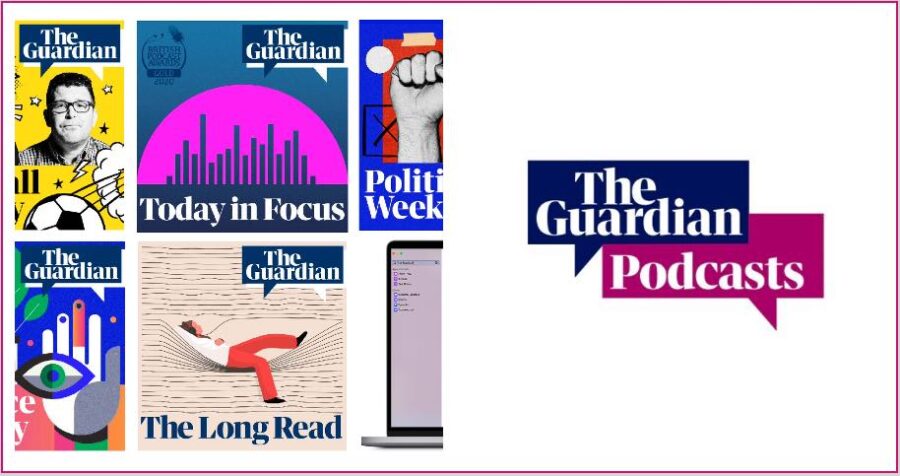 Despite being the leading commercial podcast publisher in the UK, The Guardian has only recently turned their attention to the task of branding their podcast offering

Over 15 million people in the UK listened to podcasts in 2020, with the figure set to rise by a cool five million in the next four years. That’s a lot of listeners!

For The Guardian, A-MNEMONIC worked with the idea outlined in the brief: reflecting The Guardian’s core values and the concept of ‘diverse voices in conversation’.

Besides creating a sonic identity for the suite of podcasts, A-MNEMONIC also had to search and cast for five male and female voices that could veritably represent the sound of contemporary Britain.

Before any composing could take place, A-MNEMONIC interrogated the brief to understand The Guardian’s brand values and what they may sound like when translated sonically. While  The Guardian produces several podcasts covering food, science, politics, and much more – each with a distinct theme tune  – it was missing an overarching identity that would make its offering stand out from the competition. “We had to create the sound of the brand, which works on a different level to the individual themes,” says Toby, adding that “with a sonic logo, we’re defining the whole brand identity, so the podcasts under it can come and go as needed.”

Toby says that The Guardian team were “brilliant” and they had “done all their homework, coming prepared and knowing exactly what they wanted to say. Then, they just needed somebody to say it musically, sonically, and add what we call ‘character continuity’. Their proposition is “podcasts that offer illuminating conversations with a progressive stance”, so the final branding had to sound like an idea, a conversation bubble, or even a little Eureka moment. We’re big experimenters at the studio and we just went mad trying to translate all that into just a few seconds of sound.”

The experimentation led the A-MNEMONIC team down different paths over the course of two intense weeks. “There’s no magic wand with this process. It’s trying stuff out, making mistakes, and being brave. It’s pushing beyond what we know and trying to get at what we haven’t heard towards something that’s interesting and arresting,” explains Toby.

The team presented The Guardian with a selection of options, including a few off-piste ones as a way of calibrating if they were getting closer to the jackpot. Anything “ too news-y” was rejected in the first round of A-MNEMONIC’s experiments, giving them the go-ahead to be more abstract and look beyond what might be the expected sound for The Guardian’s suite of podcasts.

After another round of experimentation, a favourite idea emerged. “We came up with what we now call The ‘Bounce’ – which was composed by A-MNEMONIC’s Adam Shaw.   I’ve always been obsessed with the sound of bounces, a ping-pong ball or a pin dropping, and I’ve always wanted to do that musically.” Toby got his wish as the final sonic piece echoes the staccato drop of a ping-pong ball; rendered impressionistically, it channels an ellipses that creates space for the ‘illuminating conversations’ The Guardian wanted to communicate through sound.

A-MNEMONIC called on Pam Myers, Cannes Lion winner and voice casting guru, to oversee the search for the right voices to accompany the sonic branding, which she relished. “This was such a delicious brief and, at this particular moment of political turbulence and world upheaval, touched on everything I care most about personally and professionally. The brief was based around exchange and dialogue, so we employed an individual approach and tested a lot. The UK attracts the best voice talent from around the world and we need to give them more opportunity to bring their authentic selves to scripts, it’s a muscle that needs more flexing. Every artist we put forward was considered from a level perspective with transparency and fairness. The process was long, exacting, knackering and wonderful,” says Pam. The expertise and care involved in the casting is easy to hear in the final recordings, with every variation sounding comfortable and authentic, like a kind acquaintance speaking in your ear.

As one of the most trusted and respected outlets in the world, The Guardian’s audio branding had to clearly encompass the brand’s identity. What A-MNEMONIC did was create an original sonic umbrella, housing disparate podcasts under its cover, that artfully communicates The Guardian’s ethos in just a few impactful seconds.